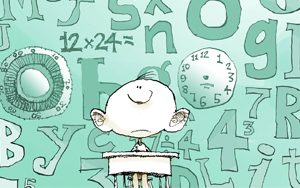 By the time I was in second grade I thought I was stupid and crazy. Why? Because that’s what I was taught. Those are not thoughts I would have come to on my own. Think about it. We all know some awesome little nutty red-headed kid who was completely happy until he went off to school. Two years into it he’s lost 10 pounds, has developed some strange phobias, a tic or two, and is even talking about suicide!

How does that happen? It’s the result of a fundamental paradigm shift. In preschool and kindergarten the approach is self-directed, project-based learning. Children move from here to there, and for the most part they decide what they want to do.

Experts call it socializing kids. But does anyone honestly believe it benefits society to make a seven-year-old beg to use the bathroom?

For me, this is where crazy began. The classroom became one giant hierarchy with gold stars and behavior charts to show everyone who were the “good” kids and who were the “bad” ones. The bad kids, of course, were the ones that didn’t follow the rules.

I was a bad kid because I tapped my foot. And then I started tapping both feet; next I began drumming my fingers.

In reality, a handful of kids in every classroom in America do the same thing. Eventually the teacher says, “What is your problem?” That happens to be one of the most damaging statements you can make to a child. The child naturally concludes he has a problem or is broken in some way. That’s the beginning of the self-fulfilling prophecy where kids with ADHD come to believe they’re sick or diseased.

Ironically, science tells us otherwise. We now know that kids who tap their feet are not doing so because they’re bad, or trying to be irritating, or because they’re on their way to a life of crime. They’re doing it because it accesses a physical motor memory that facilitates focusing. It’s what that child needs to do in order to learn.

The cycle continues: “Focus!” When he focuses by shaking his leg, he becomes the “bad” kid or the problem child and is sent someplace different with all the other deviant kids.

The lesson that child has learned has nothing to do with math or science. Instead, he’s learned that he has no place in the classroom when he is being himself. He can either stop being who he is or he can get the hell out of the room.

Do your children a favor and let them in on the real craziness. Let them know they’re not crazy, stupid, broken, or bad. Make sure they understand the institution is at fault, not them.