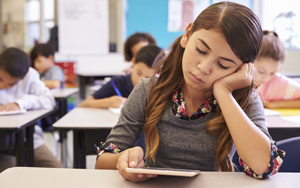 Smart Kids sat down with four students with learning differences to discuss how those differences impact their academic and social experiences at school. The students, ages 11 and 12 (whose names have been changed to protect their privacy), are in middle school. Here’s what they had to say, some of which may surprise you.

All the students had encountered classroom teachers who pushed them either too hard or not hard enough. They perceived these teachers as not understanding their difficulties and lacking the ability or desire to help them.

Mike: The classroom teacher wouldn’t help you much. She would just be there to make sure the students were all in line and doing what they were supposed to do. Sometimes I felt like she was talking more to the other students than to me.

Gail: My teachers didn’t believe I couldn’t read. They would try to teach me but I just couldn’t get it. [One teacher] wouldn’t say anything; she just wouldn’t bother to help. In third grade, my teacher kept pushing me, not letting me learn [to read].

Mindy: Mine too. The teacher would just yell at me. I would want to say, “back off.”

When asked how they felt about being pulled out of class, all students initially stated that it did not bother them—and in fact were relieved to escape pressures in the classroom. However, as they began to recall and share experiences, their sentiments changed dramatically.

Mike: All of your friends were back in the class doing fun stuff, and you had to be in another room working.

Paul: I wanted to ask, “What’s the point of going here if they are working on these couple of things in the classroom?”

Mindy: Sometimes I’d walk in and they’d be in the middle of something. Or they’d be gone—at some other activity. I’d find myself looking all over the place to see where they had gone, and if I couldn’t find them I’d go to the office to ask where my class was.

Paul: I remember a couple of times when I got back, the teacher wouldn’t even tell me what they were doing. She would just throw me a worksheet and tell me to do it. And I would be like, “I don’t even know what I’m doing.” But I didn’t say that; I was just thinking it.

Mindy: When I walked into class and the class was doing something, my teacher would explain it to me: “We’re going to do this and this and this.” It helped, but sometimes I would feel like I had missed the whole lesson.

Paul: It felt like I was left out. They always use one schedule for the day—they didn’t really say, “Oh, they’re going to be taken out for this and then come back during this.” They just sort of go on.

Scheduling issues aside, all but one of the students perceived their time in the resource room to be of limited value. The instruction appeared to be only marginally different from what was offered in the classroom, albeit at an easier level or slightly modified. Only one student reported receiving any kind of systematic instruction, and even then it was only for a year.

Mindy: As I got older and already knew how to read, they didn’t really help me with the stuff I was having trouble with—like organization. Last year, I didn’t feel like I was learning anything. I just felt like we were finishing up stuff that everyone else was doing but just in a different room.

Mike: We were doing the same stuff but they would just give us more help, and an already-filled-out worksheet. And the books were at different levels…. In the resource room, she would help you phrase it better or spell different words.

Paul: I don’t think they taught us any differently than what the teacher in the classroom was teaching. They would have us read these stories and grade us. They did too much of that. I learned a little bit; very little.

Paul: I think I got a lot more help with math in the resource room. She would show us step by step how to do the problem.

Students overwhelmingly preferred taking tests in the resource room. Those taking tests in the classroom typically had to sit in the back, but they didn’t know why; they believed that they were in the back of the room to prevent them from cheating. These students also felt considerably more pressured during tests.

Mike: … so you have to go fast and can’t really check over your work.

Paul: I always thought that I was sitting in the back of the room because I don’t know how to do it and I may look at someone else’s paper. I would feel scared that the teacher thought I was cheating off other kids’ papers; I was afraid to look up from my paper.

Mike: Or maybe it might be that your friends might help. Or you would get distracted or something—there’s less noise in the resource room. In the resource room, it would take all the pressure off of us because we had unlimited time.

Mindy: I also thought I was there to get more help with the test.

Only one student felt he had any say in his program, or received any direct feedback on it. However, all the students felt that they had valuable input to offer—especially regarding scheduling and the specific support they received. Interestingly, the students did not seem to feel that their parents played a significant role in shaping their program; they felt that most decisions were made at their teacher’s discretion.

Mindy: The teachers would make the decision that these kids are going to go to the resource room now.

Gail: It kind of bothered me. The school made most of the decisions.

Paul: There was some stuff that I just needed a little bit of help with, and they would work with me on that one thing the whole time I was there; they wouldn’t split up the time.

All four students tried to hide their difficulties from their classmates when in public school. Whenever possible, they pursued non-academic activities such as sports. These academic-based social pressures seemed to be more pronounced for the boys.

Mindy: You wouldn’t talk about anything that was hard for you.

Gail: I would talk about other stuff, instead of schoolwork.

Mike: The kids would be kind of discreet. They wouldn’t say anything, but they wouldn’t really hang around you. Some of them wouldn’t want to be your friend. You could just tell. They don’t want to be seen around you because other people might judge them and think they’re crazy or something.

Paul: Some kids didn’t want to play with others because they did other things or because they learned differently. I did different things—I went to different services during the day; I missed some of my regular class, and they thought that was kind of weird.

Mike: There was this time last year, during math, when all the kids were saying, “this is so easy” – and I was having so much trouble with it that it made me feel bad.

Sheryl Knapp is the founder of the Literacy Learning & Assessment Center of Connecticut and a frequent presenter on topics related to literacy and learning disabilities. She has Certified Level status from the Academy of Orton Gillingham Practitioners and Educators.