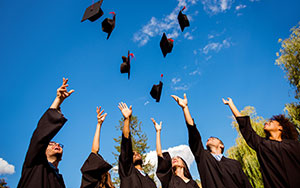 My stomach tightened as I saw my handsome, accomplished senior enter the arena in his cap and gown, walking out of adolescence and into his future. I felt relief that he was in his place—along with the usual fear that he had forgotten something vital. But his tassel was attached, his saxophone was in its place, and I saw a happy, popular young man enjoying his big day in the company of his friends.

It had been a long journey to this place, and my mind was whirling throughout the ceremony as I thought back over all the joys and tribulations we had been through together to get him there.

Adam is a unique person. As a child growing up gifted with ADHD, he heard repeatedly that he was smart, but also disorganized, unfocused and impulsive. Why, I wondered, did his teachers have so much trouble seeing the child I knew—the sensitive, generous, respectful, creative Adam? I have struggled with my role as his parent because of this dichotomy.

Is it my job to protect him from criticism, as all parents yearn to do? Or is it my job to let him try and fail, preparing him for the future when I won’t be there to rescue him?

I have discovered that raising a child with ADHD is a process, and there is no single correct answer. But I wanted Adam to learn from his mistakes rather than be punished by them. The answer for me is complex and indefinite, but I knew that to prepare him to be a successful adult I had to give my son the opportunity to fail when I was there to help him pick up the pieces.

How have I implemented this philosophy? Primarily, I have given Adam as much control as I could, starting early in his life, and increasing his autonomy as he made positive choices. I presented options, and talked about expected outcomes, but I left the final decision up to him whenever possible. He made many good choices, and he made many mistakes, but most important, whatever the outcome, he learned from it.

I allowed natural and logical outcomes to reinforce the decision-making process. I have always told him that I would love him, no matter what, and I would stand with him to face the consequences, but he is accountable for his actions in all circumstances.

When things didn’t work out, I asked what he learned from the experience, followed by what he could have done differently to achieve a better outcome. Thinking through those two questions is a crucial life skill, and one that is particularly important for an impulsive person with ADHD.

Finally, I encouraged positive outlets for his energy and creativity. A bored gifted/ADHD child will come up with his own entertainment, and it is usually not constructive. I encouraged him to try a variety of activities until he found his passion, and then gave him all the support I could so he would be successful. In Adam’s case, music has been his lifeline, and has given him a positive outlet for his creative energy.

When Adam got home after graduation, I asked to see his diploma. When he handed me the empty folder, I asked where the diploma was. With an engaging, sheepish grin, he told me that he forgot to pick it up after the ceremony.

I had to laugh at the apropos conclusion to the day.