As with other learning disabilities, the evaluation for Nonverbal Learning Disabilities (NLD) involves a thorough history in addition to comprehensive neuropsychological testing • An NLD evaluation is best done by a psychologist familiar with NLD 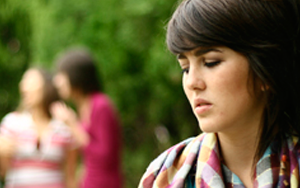 Because children with Nonverbal Learning Disabilities are highly verbal and have strong rote memory, NLD often isn’t noticed until they are older. These children tend to do well in elementary school, and in many cases are seen as gifted. However, historical clues are there if you look.

Many children with NLD have early problems with fine motor skills, balance (walking, riding a bike), and activities such as tying shoes. They may be clumsy and bump into things because of poor spatial awareness. They are not the stars of T-ball or ballet. They often talk a lot because they rely on verbal skills to connect with others. They have problems integrating and responding to the everyday experience of being bombarded by nonverbal stimuli, so they may become inflexible and dependent on routine as a way of coping.

Despite their strong verbal skills, these children can have difficulty with the subtleties of social communication and understanding, and with language that isn’t concrete. They don’t “get” many aspects of social communication (pragmatic language) and have trouble with language that is inferred or ambiguous. They may “miss” jokes or sarcasm, and have trouble with reading comprehension when themes or ideas aren’t clearly stated.

NLD children tend to be detail-focused; they see every tree but can miss the forest. This is a problem when they have to differentiate between main and salient ideas in reading, writing and studying. Teachers and parents don’t get it when bright, verbal children miss main ideas and don’t know how to respond to open ended questions, fiction, or higher level tasks such as “describe the theme” of a book.

Parents report social problems that are longstanding. These children miss nonverbal cues that make up 70-90% of emotional communication. Their behavior runs the gamut from being awkward, not knowing how to join with peers, and having trouble interpreting facial expressions or friendly teasing, to being significantly impaired, socially isolated, and socially inappropriate.

These symptoms of NLD can vary from mild to severe. In addition, children can have co-existing problems, such as ADHD, mood disorders, or anxiety.

Testing can confirm the existence of visual-spatial deficits and their impact, and identify co-existing problems. The components of a comprehensive battery should include:

More evaluation components might be added to explore attention or social problem solving.

Once a correct diagnosis has been made, parents and school staff need to become well versed in the underlying processing issues in NLD to respond helpfully to the child and provide the academic and environmental supports needed in school and at home.

The author is an evaluator, consultant, and therapist who specializes in working with children with NLD.