The following article is excerpted from the book, The Stigmatized Child by Anne Ford, Chairman Emeritus of the National Center for Learning Disabilities, longtime LD advocate, author of several books on parenting children with learning disabilities, and the parent of an adult child with LD 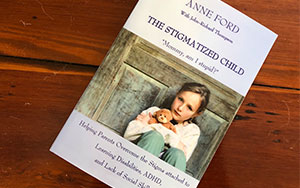 The dictionary defines stigma as “a mark of shame or discredit; a stain or reproach, as on one’s reputation,” and “a set of negative and often unfair beliefs that a society or group of people have about something.”

Few parents would use the words “shame or discredit; a stain or reproach” when describing their child’s learning disabilities. At the same time, many parents and children believe those words exactly describe how society views a learning disability or related disorder.

Let’s say you are an adult with severe dyslexia and you are unexpectedly asked to read something aloud at a company meeting. Would you rather say you were having trouble seeing because you forgot your glasses….or because you have a reading disability? If you have ADHD, would you rather tell a friend the subway was delayed….or that you were so distracted you completely forgot the time and place where you were supposed to meet?

There are so many layers to the problem of stigma. Some parents, hoping to avoid “labeling” their child, can actually contribute to the child’s sense of stigma. Secretive behavior can lead a child to believe he or she has something to be ashamed of. Don’t tell anyone. No one needs to know. No one expresses these sentiments over things they feel positive about.

I have found that parent’s sense of stigma is most acute when the child is newly diagnosed. This is the time when parents do all they can to avoid labeling the child. A child diagnosed with mild dyslexia probably doesn’t need the whole Special Education label, but a child who unquestionably needs Special Ed is granted no favors when a parent delays treatment altogether due to fears of a label.

For young adults, the stigma often comes later in high school and into the college years. I can’t tell you how many times I have heard that someone has dropped out of college (or flunked out) because they refused to seek the help that is readily available at nearly every college in the United States.

Why are these parents and children so reluctant to acknowledge something that so obviously affects so much of their lives?

The reason is obvious and intractable, and it is wholly to do with societal realities. There is a large and stubborn strain within the population that refuses to include LD in the list of “acceptable” conditions and persists in believing learning disabilities and related disorders are simply excuses for laziness or poor parenting.

When I served as Chairman of the National Center for Learning Disabilities, we commissioned a Roper Poll about public attitudes about learning disabilities. These were the findings under the heading Stigma:

There continues to be a stigma associated with learning disabilities for most people—perhaps stemming from a lack of understanding about LD. Signs of this stigma emerge in both explicit and implicit ways:

These findings illustrate the prominent role of stigma when early diagnosis and intervention is delayed. The perceived stigma of LD persuades many parents to continue to ignore potential signs of trouble. Instead they choose to wait and see if their child will “grow out of it.”

Many parents will continue with the wait-and-see attitude long after they have already waited too long and seen ample evidence that there is a problem.

To learn more about the ways stigma impacts the lives of children and adults with LD and related disorders, read The Stigmatized Child by Anne Ford with John-Richard Thompson; Capri Island Publications, New York, NY, 2017.