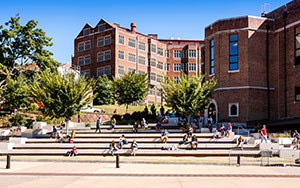 The college search for my son, a student with learning disabilities, began no differently than it does for many students. Erik answered the standard college search questions: Public or private? City, town, or rural campus location? State? Distance from home? Size of student body? Major? Division I, II or III sports?

While an initial list yielded schools with his intended major—Sports Management—we continued to look through college guides, plan college visits, and attend information sessions and college fairs. We used The K&W Guide to Colleges for Students with Learning Differences to learn about college disability services.

Each college visit included a stop at the campus Disabilities Support Services (DSS) Office. Heeding advice from Smart Kids, I knew if Erik wasn’t comfortable in the office, he would never go there on his own. We visited DSS offices that were blocks from other campus buildings, ones that were on top of hills. We looked at colleges that had varied levels of supports: a fee-based structured program, a DSS office with learning specialists, or an Americans with Disabilities Act compliance office. We weren’t sure what type of program would best suit Erik’s needs when we started this quest at the end of his sophomore year.

During a tour of Northeastern University, a harried parent pointed to the campus map asking Erik if he could show him the library. Erik said he wasn’t a student, just on a tour. Erik chuckled to me, “Maybe I belong here, people think I am already here.” Without an appointment, we dropped by the Disability Resource Office and were greeted immediately by an effervescent woman who began the conversation. An offer of cookies to a starving high school wrestler was a bonus. For the first time, Erik easily explained his learning disability. She described the programs and told Erik she would see him on campus. He was sold.

To help him through his transition, Erik attended The Program for Advancement of Learning, a program at Curry College for rising high-school seniors to understand their strengths, learning style, and the accommodations and supports available in college. Erik also took a class at our local community college in Advanced Study Skills, something he felt he needed. Erik worked on self-advocacy skills outside of the high school setting.

After narrowing down the list of colleges, Northeastern was the only one without a Sports Management major. However, he chose it anyway because that was the campus where he felt most comfortable.

Did Erik make the right decision?

Definitely. In his first semester, he took business classes with about 40 others and lived on a Learning and Living Community floor with other business majors, which meant built-in study groups. He had the support of Northeastern’s fee-based structured Learning Disabilities Program and the Disability Resource Office, and relished the co-op program, which included three six-month paid jobs.

Although Northeastern did not meet all his presumed requirements, it met the important ones. More important, we learned that there is life after Special Education. And sometimes it comes with packs of cookies too!