Kids often rely on their parents to rescue them from their irresponsible behaviors • But is stepping in always the best response, or is allowing your child to suffer the consequences more helpful in the long run? 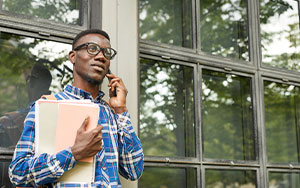 When my son Eli was in his last year of high school, he was juggling a lot: six classes, homework, play rehearsal, his school’s Shakespeare troupe, college applications, and of course all the “stuff” that comes with being a senior. It was a lot to stay on top of. So one morning when he was in a rush to get out the door for school, he left behind his permission slip for a special out-of-town Performing Arts weekend that was a rite of passage for the seniors in his theater program.

How did I know all this? Because at about 9:00 a.m. that morning, as I was driving home from an out-of-town speaking engagement I had the night before, I got the dreaded call: “Mom, where are you?”

Eli was clearly upset that he forgot the permission slip, and since the sign-up was first-come, first-served, he needed to hand it in during theater class (which was in about an hour), or he would possibly not get a spot. And since he had a test in the period before theater he didn’t want to drive home to get it himself. You get the picture. So what did I do?

My first instinct was to say no. First, I wasn’t planning on going straight home, so this would mean a huge change of plans for me. Second, we talk a lot about responsibility in our house, and this had the potential to be a major teaching moment. “Your trip, your responsibility.” “What are you going to do next year when you’re in college?” And finally, he could go home during lunch to get it and take his chances that there would be a few slots left.

But then the mom in me took over. “He’s been working really hard. It’s one permission slip on one crazy morning. Opening night was last night and he’s exhausted. What’s the big deal if you play nice mom and bring it to him? This trip is the highlight of senior year.” And on it went—all this with no coffee—until I finally said, “I’ll meet you at school in an hour.”

As I drove along the highway I thought long and hard as to why I said yes. Maybe because Eli is pretty responsible, keeping on top of his stuff and doing what he needs to do with limited prompting. Or, perhaps I just didn’t want Eli to miss this trip. Too big a consequence for such a small action! But most likely I liked being needed. With one child graduating college that year, and another high school, I knew my opportunities to “save the day” would be few and far between going forward. Can’t underestimate that!

So did I let my son sink or swim? Neither really. I like to think of myself as his lifeguard that day throwing him a rope so he could help himself out of the deep end. What would you have done in that situation?

Leslie Josel is the Principal of Order out of Chaos, an organizing consulting firm specializing in student organizing. She is the author of What’s the Deal with Teens and Time Management and the creator of the award-winning Academic Planner: A Tool for Time Management. To learn more, visit www.orderoochaos.com