To address disagreements between parents and the school regarding placement of a child with LD, the IDEA guarantees two options: mediation and a due process hearing • In mediation the parties try to reach an agreement with the help of a trained facilitator • If mediation fails, parents can file for a due process hearing, which is a formal legal proceeding 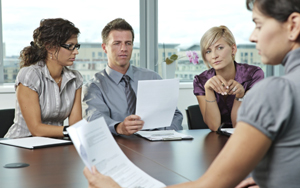 To help implement this federal law, the IDEA includes a number of so-called procedural safeguards that have been put in place to ensure that your child’s rights are fully realized under the law. Among those safeguards are provisions designed to resolve disagreements between parents and schools regarding a child’s placement.

When a dispute arises involving a child’s educational plan, parents are entitled to be informed about their Procedural Safeguards regarding dispute resolution alternatives, including mediation and due process hearings.

Issues should be resolved by the parties at IEP Team meetings if at all possible; and only if a mutually agreeable resolution is not possible should mediation or due process be considered.

Mediation is a form of dispute resolution where a mediator—an impartial, trained third-party— helps the parties in a dispute resolve their disagreement. The mediation process differs from formal legal proceedings in that the mediator, unlike a judge or hearing officer, does not reach a decision regarding the dispute, but merely facilitates the two parties in reaching an agreement.

The mediation process, as described under the IDEA, must be entered into voluntarily by both sides, must not be used to delay or deny a parent’s right to a due process hearing, and must be conducted by a qualified and impartial mediator who has been properly trained in effective mediation techniques.

Mediation does not require an attorney, but parents often choose to be represented by one. The goal of mediation is to resolve the case by coming to a mutually agreeable settlement, which then takes the form of a written contract signed by both parties. Because this is a legal contract, which can be enforced in State or Federal court, it may be advantageous to be represented by an attorney.

State Departments of Education are required to maintain an updated list of qualified mediators who are knowledgeable about the laws and regulations pertaining to special education services, and the State is required to bear the entire cost of the mediation process, including meetings with impartial third parties to inform parents of the benefits of the mediation process.

The mediation process must be scheduled in a timely manner, held in a location convenient to the parties involved, guarantee confidentiality of the participants, and use legally-binding written agreements.

In most states, the majority of disputes that go to mediation result in a settlement agreement between the school and the parents.

If mediation fails, another form of dispute resolution available under the IDEA is the due process hearing. Unlike mediation, parents have a right to file for due process without agreement by the school district.

Many parents retain an attorney to represent them in a due process hearing. This is a legal process that includes the submission of evidence, testimony of witnesses and writing of briefs.  Though parents can represent themselves, it is advantageous to have representation by an attorney with knowledge about legal procedure and specific expertise in special education law.

To take this action, a parent must first submit a due process complaint to their State Department of Education. A due process complaint must allege a violation of a child’s rights under the IDEA, and be filed within two years of the time that a parent knew, or should have known, that the violation occurred (this is known as a “statute of limitations”). Certain states have their own statute of limitation timeframes, but these periods may not be less than the timeframe laid out under the IDEA.

After a complaint is filed, the party receiving the complaint has 10 days to send a response addressing the issues raised in the complaint. The hearing officer assigned to the complaint then has five days to make a determination as to whether the due process complaint, on its face, meets the basic filing requirements, including documentation of the child’s name, address, school attended, a description of the nature of the dispute, and a proposed resolution to the problem.

The 2004 amendments to the IDEA added a “resolution meeting” requirement to the due process provisions, which is meant to provide parents and the school district with an opportunity to resolve the issues prior to the initiation of due process. The requirement provides that, within 15 days of receiving notice of the parent’s due process complaint, and prior to the initiation of a due process hearing, the school district must organize a resolution meeting between the parents and those members of the child’s IEP Team who have direct knowledge of the facts surrounding the complaint. A child’s parents are entitled to a role in determining the members of the IEP Team that should attend. A representative of the school district must also be present, but may not be accompanied by an attorney unless the parents also attend with legal representation.

It is important for parents to understand that these procedural safeguards exist, and the circumstances under which these rights should be asserted. The rights dispute resolution was explicitly built into the IDEA as a means for strengthening the child’s right to educational equity and inclusion.

Issues should be resolved by the parties at IEP Team meetings if at all possible; and only if a mutually agreeable resolution is not possible should mediation or due process be considered. Mediation is preferable to due process in that it is a less costly and time-consuming solution to resolving issues between the parents and the school district.