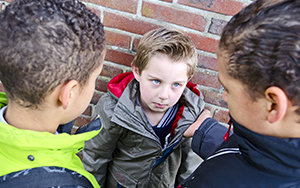 School bullying is a widespread problem throughout the United States. Research shows that more than 3.2 million students are victims of bullying each year; 17% of students report being bullied two to three times a month. While specific data is hard to come by, it is widely acknowledged that children with special needs make up a significant proportion of bullied students because of their unique vulnerabilities and challenges. One estimate suggests children with disabilities are among a group of kids that is 63% more likely to be bullied than other children.

In many school systems, parents, teachers, and administrators are attempting to create environments that are safe for all children, yet thousands leave home each day fearing the school-yard bully. “Everything depends on the school culture,” says clinical psychologist Dr. Joel Haber. Known as “The Bully Coach,” Haber is a nationally recognized expert who has spent more than two decades working to identify and prevent abusive behaviors. His experience has led him to conclude that the key to bullying prevention is consistent responses from schools, families, and the community.

According to Haber, bullying occurs when someone with more power repeatedly hurts someone with less power, intentionally and unfairly. While the typical image of bullying involves physical confrontations, bullies also use their social and verbal skills to create an “imbalance of power,” making themselves feel better at someone else’s expense.

Contrary to popular belief, a small percentage of bullying involves physical confrontations; a higher percentage is comprised of verbal and “relational” bullying. Relational bullying aims to exclude the victim from friendships or activities, and may, in fact, be the most painful. Statements that focus on leaving a child out of a group (“You can’t play with us.” “Everyone is invited but you.”) marginalize that child and minimize his self-worth.

What Makes A Child A Target?

Children are vulnerable to bullying because they are “different” from the majority of kids. Children with special needs are particularly vulnerable because of the imbalance of power between them and more typical kids. Traditional targets tend to be painfully shy, physically small, and not assertive; they lack motor coordination, are not good at sports, and often have learning disabilities, social challenges, and few friends. Bright kids—especially those who are socially awkward—may inadvertently cause bullies to be jealous of them, provoking behavior aimed at diminishing their worth.

What Makes A Child a Bully?

While some bullies are insecure, the majority have high self-esteem, popularity, above average intelligence, and are verbally and socially adept. Characteristically, they have a strong sense of contempt, entitlement, and lack of empathy. They believe they have a right to hurt others and they do not understand the emotional suffering they inflict. While there is no gene that predisposes a child to bullying, a child with an aggressive personality may be prone to bullying behavior and easily influenced by environmental factors.

Just as targets need to be taught the language to respond and given opportunities to feel good about themselves, bullies must be taught acceptable, alternative behaviors and given chances to gain positive attention. It’s especially important that they’re taught empathy (“How would you feel if you were in his shoes?”), see respect and conciliation modeled at home, are disciplined in a consistent manner, are taught the importance of taking responsibility for actions, and that they develop a better understanding of consequences.

“Bullies bully when there are people around to react,” says Haber. Bystanders often feel uncomfortable intervening; they’re glad they’re not the target and don’t want to be picked on next. But without bystander support, the targets feel abandoned while bullies feel supported. Over time, targets begin to rationalize the bullying, thinking there must be something wrong with them. Similarly, bystanders justify their failure to respond by rationalizing that the targeted child brings it on himself.

Haber emphasizes that bystander training, a touchstone of a respectful culture, should be an integral part of the school curriculum. Kids must be encouraged to be allies. To develop a successful bullying prevention program, schools, homes, and communities must set the tone by declaring, consistently and clearly, in a top-down approach, “You are as responsible as the bully unless you stand up and be an ally.”

Learn more about Haber’s work and the Respect U Program at www.respectu.com
Eve Kessler, Esq., an attorney with The Legal Aid Society, NYC, is President of SPED*NET Wilton (CT) and a Contributing Editor of Smart Kids.