When a student teacher returns to the preschool he once terrorized, a young child triggers memories of his struggles with ADHD 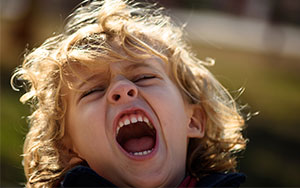 The children and I hide from the evil one-eyed monster. We remain silent because Cyclopes have ultra-sensitive hearing and can discern the softest sounds. I paint a picture of our great escape for my team of youngsters. Jack is going to lead the way with his G.I. Joe; Isabella will stay behind as a diversion. Nicholas has a cold; I tell him he cannot sneeze. He wipes his nose, indicating he understands. But the second we jump into action, the bell rings and the kids run to their assigned spots for music time. Our time as a team has been cut short; imagination fades. As a student teacher in preschool, my most rewarding time is spent helping three- and four-year-olds discover teamwork through fantasy. I decide to discuss this with the head teacher.

As I approach Mrs. Lutter, four-year-old Thomas begins to tantrum on the floor. I sprint over, hoping to unravel the enigma that is Thomas. Mrs. L. scurries across the room to help. Thomas responds with a loud shriek and throws his red Power Ranger at the wall. He races around the circle, singing and stomping his feet to a beat only he hears. At first, I don’t understand why he is acting so inappropriately. However, as I watch him, I hear my mom reassuring me, “It’s okay, Jake; it’s all going to be okay,” and I remember…

It is 1997; I am four. I zoom around the circle during music class—oblivious. The other kids sit silently, waiting for directions, but I want to fly and there’s no stopping me. Later, I pound the carpet and crawl under desks. At the Metropolitan Museum of Art, I lie on the floor in the armor gallery, my face reveling in the feel of the cold marble. When out for dinner, my parents restrain me from attacking other kids with fake swords.

I am trapped in my mystifying world, unable to make myself understood. One day, when my mom picks me up from preschool, my teacher tells her something might be wrong.

The following year, I am taught one-on-one in a closet taken over for speech therapy. The kids in my class pin cut-outs of the first letter of their names on their shirts so I can remember them. When I become overwhelmed, my aide takes me to do pull-ups in the gym.

Years pass. Slowly but surely there is progress. I finally talk in full sentences. My temper improves. I walk through galleries at the Met discussing the art. I thrive with tutors, therapists, special education services, and hard work. In high school, everything begins to make sense. I go from failing math to achieving 100% on quizzes, from being unable to write a grammatically correct sentence to being published on NPR’s This I Believe. I can understand, memorize and explain Shakespeare. As for standardized tests, they’re not my forte.

Returning to student-teach at the same preschool I terrorized thirteen years ago has been an emotional journey. I recognized myself in Thomas from the first day of class; we are connected. He mirrors my old rituals, breakdowns, and needs. I wish I could tell him that I know what it’s like, that I’ve been to a place not far from where he is. That I know it’s hard, harder than it sounds, maybe impossible. That it will take drive and determination—and staring down mythical beasts. Of course, I can’t, but every day I try to do a little something that maybe he’ll remember.

Jacob Presson is a New York-based actor and writer.