The following article is excerpted from the book, The Forgotten Child by Anne Ford, Chairman Emeritus of the National Center for Learning Disabilities, Honorary Board Member of Smart Kids with LD, longtime LD advocate, author of several books on parenting children with learning disabilities, and the parent of an adult with LD • Using her own family as an example, Ford examines the ongoing responsibilities that having a child with LD entails for all family members even into adulthood. 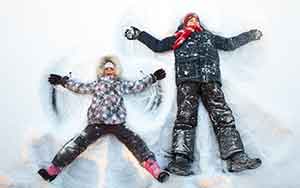 You, as brothers and sisters of an individual with special needs grow up seeing that not all people have an easy path in life and that some must struggle on a daily basis, often without positive results. You may feel anger at times, resentment, jealousy, or even guilt, and that is all completely normal; but in addition it is quite possible that you feel a surge of pride when your sibling with a disability achieves something, or sympathy when they fail, and overall, feelings of love and devotion.

Like so many siblings of children with LD and related problems, my son Alessandro has a heightened sense of compassion. As he says, “I believe that having a sister with a disability forced me into acceptance.” He watched Allegra struggle every day and watched my often futile attempts to make everything better, and he learned that we are all imperfect, all human, with failures and shortcomings, some of our own making and some not.

When Alessandro turned 13, I told him he would have to take on the responsibility for his sister if anything ever happened to me. He accepted without a moment’s hesitation, and I knew in my heart he meant it and would do the best job possible, but that didn’t stop me from worrying. I worried that Allegra might spend much of her time alone, or without a meaningful relationship apart from her family.

And then, on March 24, 2011, I received a phone call from Allegra to tell me she was engaged…I was so excited and happy for her I couldn’t help but cry. It was a real fairy-tale ending for Allegra, and one that I hoped might happen but did not expect. I was relieved she would have someone in her life who truly loved her and respected her. I also realized that this would not be the end of her dependency on me, and there would be days where she still relied on me for advice and guidance.

I try not to hover. I try to give her as much independence and time with her husband that she needs. I realize that not every child with LD will have the ending Allegra has had, but I also realize there is always a possibility for this or similar triumphs to take place. But parents must continue to play the role of advocate day by day, year by year. Remember, too, that triumphs and success come in many forms, as do happiness and contentment. Whatever is right and good for your child, and the thing that makes them most happy is the real triumph. For Allegra, it was marrying Josh. It was what she truly wanted at this stage of her life.

When Alessandro heard the news about her engagement, he felt as happy as I did. I’m sure he was a little relieved too. The responsibility for my daughter’s future would no longer fall solely on his shoulders. That’s not to say he won’t still be involved. He will always be involved in his sister’s life: he walked Allegra down the aisle at her wedding, but the chances of him walking out of Allegra’s life are non-existent.

To read more about Ford’s experience and the lessons she imparts, read The Forgotten Child by Anne Ford with John-Richard Thompson, published by Capri Island Publications, 2015. The book is available in many bookstores and at amazon.com. Ford and Thompson have written other books based on Ford’s experience as an LD advocate: Laughing Allegra, On Their Own, The Stigmatized Child, and A Special Mother.