Skip to content
SIGN UP FOR OUR FREE eNEWSLETTER
Donate Now
AT A GLANCE During a school disciplinary hearing, kids with identified disabilities have special protections under the law • Parents need to understand these unique rights and be proactive about ensuring their implementation 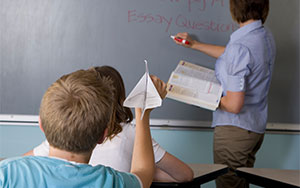 These laws appreciate that students with disabilities may display disruptive behaviors due to their disabilities, and they should not be punished for those behaviors.

Instead of punishing a student with a disability for conduct caused by his disability or because the school failed to address his challenging behaviors properly, the laws require schools to put in place suitable behavioral supports that focus on the child’s precise needs.

In some situations, students with and without disabilities are treated the same when it comes to discipline. For instance, all students suspended for fewer than 10 school days within an academic year are treated alike. If the suspension is for more than 10 days, all students have the same right to a disciplinary hearing conducted by the school superintendent or a designated hearing officer.

The next part of the hearing determines punishment. The team explores the nature of the student’s behavior as well as his history: Was there violence involved? Was the student baited, bullied, or targeted? Does he have a prior disciplinary record? Is he an honor student with an unblemished past?

After discussion, the team may recommend and implement further suspension or expulsion for students without disabilities. However, at this point, students with a documented disability are given extra protection from strict disciplinary enforcement.

Following a finding of guilt, but before the school imposes a punitive “change of placement” – such as suspending a child for more than 10 days – the laws require what is called a Manifestation Determination Review. The IEP or Section 504 team must meet to determine if the behavior was caused by or related to the student’s disability, or was the behavior a result of the school’s failure to implement the student’s IEP or 504 Plan?

If the team finds that the behavior was either a manifestation of his disability or a direct result of the school’s failure to implement his plan, the laws outline further measures to safeguard the child. First, the school must conduct a Functional Behavioral Assessment (FBA) to identify triggers for the problem behavior and develop a suitable Behavioral Intervention Plan (BIP) to help prevent the behavior from happening again. If an FBA was conducted and a BIP developed prior to the misconduct, the next task is for the team to reevaluate the BIP and modify it to address the challenging behaviors.

As for additional punishment, schools cannot suspend the student for more than 10 school days per year. Instead, the child should return to school with an updated and appropriate behavior plan, unless the team agrees to change his placement as part of a modification of the BIP.

A student’s classification as a child with a disability or a finding that his behavior was caused by his disability should not be considered an “excuse” for inappropriate, antisocial, or illegal conduct. Rather, behaviors that are clear and clinical manifestations of a child’s disability should be understood as mitigating factors moving forward.

The laws recognize that standard disciplinary consequences won’t help a kid with ADHD be less impulsive, hypersensitive or volatile, improve his social judgments, manage his anger with better emotional control, or stop engaging in risky behaviors. Ultimately, schools must understand the student’s troubling behaviors in the context of how he was experiencing the environment at the time and address those behaviors by teaching coping mechanisms for when similar situations occur.

If, on the other hand, as part of the Manifestation Determination process, the team determines that the student’s behavior was not a manifestation of his disability and was not a direct result of the school’s failure to implement the IEP or 504 Plan, he is treated – and disciplined – the same way as a student without disabilities who has violated the same or similar code of conduct.

As parents, you have the right to appeal the team’s findings through the traditional appeal process to the Board of Education and to the State Department of Education. However, students with disabilities can also seek an impartial hearing to challenge the school’s Manifestation Determination. This gives you and your child an additional level of appeal.

When to Take Action

During the disciplinary process, if you believe your child – who has not been identified or classified as a student with a disability – does, in fact, have a disability, you have recourse. You may request – and are entitled to – an expedited evaluation and a team meeting to discuss classification and potential manifestation, so long as you have a factual basis to do so and have not previously refused either to have your child classified or to cooperate with an evaluation.

Better yet, don’t wait until you’re involved in the disciplinary process. If you suspect your child has a disability where his impulsive or aggressive behaviors put him at risk for getting into trouble at school and for school disciplinary procedures, act now to have him evaluated and classified as a student with a disability. That will ensure he is afforded the rights of students with disabilities should the situation arise.

Exceptions to the Rule
Even if the team determines that a student’s behavior was a manifestation of his disability, if the behavior involved illegal drugs, weapon possession or serious physical injury to another student or school employee, the student can be suspended for up to 45 school days, in addition to receiving behavioral interventions.