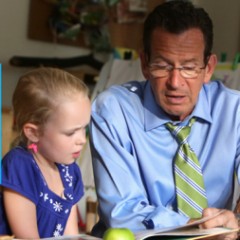 In 2014, Dannel P. Malloy was elected to his second consecutive term as Governor of Connecticut. That election capped a political career that included four terms as the mayor of Stamford, CT, earning him the title of longest-serving mayor in the city’s 365-year history.

Not bad for a 59-year old politician who couldn’t button his shirt or tie his shoes until he was 10, and who to this day operates without email, as he continues to wrestle with learning disabilities.

“Anyone who knew me as a young child knew that I had differences,” he recalled. “I had very poor gross and fine motor control, which were the physical manifestations of my disabilities. Teachers thought I was mentally retarded as late as fourth grade. I couldn’t read or do math. I recall one teacher posting my failing spelling grades on a chalkboard.”

Do everything that you can to make sure that your child grows up as a nice person, a happy person. People who are nice and personally happy will be successful.

While growing up with LD was difficult, Malloy began early on to hone the skills that helped compensate for his learning difficulties. As a young boy he listened to talk shows and the news on a radio to sharpen his listening skills. “Oral communication and oral learning skills were important to me,” he said. “I have very good recall. The radio was a good way to learn the language and the skills that you might use to convince people of your point.”

Malloy eventually outgrew his poor coordination and ended up playing football in high school and rugby in college. Although by eighth grade his reading skills had also improved, he continued to utilize books on tape throughout his education. “Today, I am a very good reader,” he said. “You can’t get through law school without that ability. But it took years for that to happen.”

While attending Boston College, he admits writing papers was a struggle. Thankfully, as a freshman he met Cathy, his wife-to-be, who became his helpmate. “It’s difficult for me to get written language out in any form, so the ability to dictate or to record was important to my success, both as an undergraduate and as a law student. As my girlfriend, Cathy would type what I would say.”

In addition, unless it was a multiple-choice test, the college allowed someone to write down his answers or his professors allowed him to tape record exam answers. In fact, he was the first person without sight impairment to take his bar exam orally.

In his first job as an assistant district attorney in Brooklyn, NY his exceptional oral skills contributed to a record number of convictions. “When it came to trying cases,” he said, “I don’t think there was anybody better. Once everyone realized what I was good at, I was allowed to concentrate on that. I tried 23 felony cases, with 22 convictions in a period of 18 months. That’s an extraordinary conviction rate and number of trials.”

Malloy traces his interest in government to the fourth grade when he ran for class office. By the time he was in high school, he was advocating for a school lunch program in front of the city’s Board of Education.

Those early lessons paid off. Long a champion of education, in 2012 Governor Malloy signed an education reform bill considered by many to be a national model. In addition, he’s helped transform the University of Connecticut into an institution that prepares students for 21st century jobs, while also promoting access to quality early childhood education for all, regardless of economic status.

As someone who struggled throughout his education, Malloy is acutely aware of the importance of early, positive educational experiences: “Physical maturation of the brain is impacted by how much stimulation a child receives, and a child in a learning environment is stimulated to a higher degree. On top of that, you’re stimulating the child with knowledge that can be accumulated.” And as he concluded, “That’s a very winning combination.”