In this final article in a series on the OCD-ADHD link, we look at two behaviors that might be related to either disorder • Understanding the motivation behind the behavior is fundamental to receiving an accurate diagnosis and the appropriate treatment 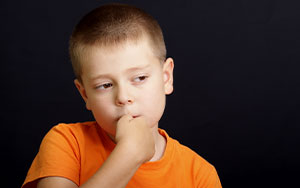 Typically, the behaviors associated with these disorders are assumed to be related to OCD. However, Roberto Olivardia, Ph.D., a clinical psychologist specializing in treating ADHD and OCD, explains how two of them— hoarding and BFRB—can co-exist with either OCD or ADHD. The behaviors themselves look similar in kids with either condition—“hoarding is hoarding”— but the motivations underlying the behaviors are different.

To ensure kids receive appropriate treatment, Olivardia stresses that the diagnoses must be accurate.

Hoarding is characterized by saving things of limited value because of excessive emotional attachments or obsessive fears of losing them. Hoarders with OCD save things because they’re overwhelmingly frugal and feel it’s “wasteful” or “immoral” to throw things away. They often attach feelings of sentimentality to things (from a birthday card to a used napkin) and personify objects, treating them as if they have feelings.

On the other hand, people with ADHD are impulsive spenders who typically buy lots of items, tire of them quickly, and keep acquiring more. Hoarders with ADHD retain things not to save money or because they’re deeply attached to the items but to save “executive bandwidth” in the future: What if I need this later and have to go through everything it took to get it all over again? They believe replacing things would be too complicated, time-consuming, and difficult.

Additionally, those with ADHD often accumulate things “to perfect a system.” For example, they might need a planner to help them stay organized. They’ll continue buying new planners until they find one that works perfectly for them. As each new planner doesn’t do the trick, they feel a sense of shame: to throw the old ones out is an indication of failure: “Maybe this one will work down the road. I’ll just keep them all to optimize my chances of success.”

Compared to kids with OCD, those with ADHD are distracted by clutter; it actually worsens their symptoms.

What Are Body-Focused Repetitive Behaviors?

BFRBs are chronic and excessive self-grooming actions that result in skin, hair, or tissue damage and cause significant daily distress.

BFRBs comprise a variety of behaviors, including skin picking; skin biting; hair pulling; nail biting; nose picking, and similar activities involving the inside of the mouth, cheek, inner lip or tongue. The conditions range from mild to severe and play out differently depending on the child. Most kids with BFRBs spend hours each day on the behaviors, which typically last for years, interspersed with periods of remission.

Although kids repeatedly try to stop or reduce their BFRBs, Olivardia explains that they feel “compelled” to continue. Sometimes, they’ll pick or bite in an intentional manner, gaining a sense of deep pleasure, “good” pain, or relief from their actions. Other times, they may be distracted, unaware that they’re even pulling on their hair or sucking on their cheek.

BFRBs impact kids’ lives in troubling ways. Scarring, bald spots and infected skin are noticeable and hard to conceal. Kids are often embarrassed and ashamed of the behavior itself, as well as the damage it causes. They may avoid social activities, especially places where their bodies are on display (eg., the beach, pool or gym) and risk becoming isolated and developing co-existing conditions, such as serious anxiety or depression.

Olivardia stresses that although BFRBs are often part of the constellation of OCD symptoms, many kids with the behaviors do not have OCD, but ADHD. It may start with a child being distracted by a pimple or an uneven fingernail, he explains. “While a typical kid might want to squeeze the pimple or pick at the nail, they’re able to control their urges and stop themselves.” But kids with ADHD have poor impulse control. They start squeezing or picking to rid themselves of the distraction and persist, although they see that they’re scarring their skin. “They just can’t stop.”

For kids with ADHD, a main function of these sensory-based behaviors is to provide forms of stimulation and arousal. For example, BFRBs serve as a way for dopamine-deficient ADHD brains to get “little dopamine hits” for motivation and focus. The behaviors help kids feel more “present” and grounded, like a fidget toy, but with the body serving as the fidget.

BFRBs also operate as concrete, goal-oriented activities that produce feelings of success. Olivardia explains that pulling out a straggly piece of hair, for instance, achieves a goal and can be reinforcing for kids who don’t often feel a sense of accomplishment.

Furthermore, BFRBs help relieve stress. Hyperfocusing on picking their skin, pulling/eating their hair, or chewing their nails/cheeks can send kids with ADHD into a “trance” to escape from feeling overwhelmed by a day of executive demands.

This article is based on an ADDitude webinar, The OCD-ADHD Link: What You Should Know When You Have Both, by Roberto Olivardia, Ph.D., a clinical psychologist and clinical instructor of psychology at Harvard Medical School with a private psychotherapy practice in Lexington, MA. Eve Kessler, Esq., a former criminal appellate attorney, is Executive Director of SPED*NET Wilton (CT) and a Contributing Editor of Smart Kids.