Although colleges consider the SAT and ACT interchangeable, these entrance exams are significantly different • Understanding distinguishing characteristics of each enables students to opt for the test that showcases their strengths 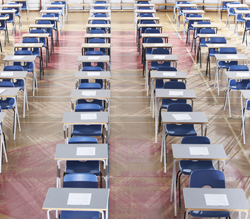 Until a few years ago, most high-school seniors who were preparing for college took the SAT. The lesser-known ACT was limited mostly to students living in the Midwest. Today, however, the SAT and ACT are interchangeable.

While colleges consider the exams equally useful in assessing potential candidates, the tests are worlds apart in style, allowing students to select the exam that plays to their particular strengths.

Understanding the distinguishing characteristics of the SAT and ACT, as well as knowledge of one’s own strengths and weaknesses, are vital in deciding which test will best showcase your skills. Following are the major distinctions between the two exams.

While in general the ACT calls upon students’ high-school knowledge, the Reading Comprehension section does not test prior knowledge; instead it calls upon inferential thinking. Although not nearly as vocabulary-heavy as SAT passages, ACT reading selections do require speed. There are four passages, each between 700-900 words, and students have 35 minutes to answer 40 questions. Each question has four answer choices, as opposed to five for the SAT, but like the SAT, they require careful scrutiny to avoid being tricked.

The ACT, on the other hand, tests Intermediate Algebra and Trigonometry, so most juniors have taken the requisite coursework. There are usually only three or four trig questions, however, and they are pretty easy to answer by knowing only two trig equations.

Both the SAT and ACT math sections have a multiple-choice format, but the SAT, in addition, has a section that requires students to record their own answers. (No guessing here!) Both tests allow specific types of calculators, while banning others.

The ACT Essay Writing section, also added in 2005, is optional as mentioned earlier. Check the requirements of the schools to which you’re applying to see if you’ll need this test. Students have 30 minutes to respond to one open-ended question that typically relates to high-school students (e.g., Would uniforms in high school be beneficial?).

A Third Option: Neither Test
Because good students can be poor standardized test-takers, the National Center for Fair and Open Testing is working to eliminate college admissions testing. As an alternative, the organization promotes fair and valid student evaluations. To date, 850 four-year colleges have made admissions tests optional. To see a list of these schools, go to Fair Test.

Joan M. Azarva runs Conquer College with LD/ADD, a website for parents of college-bound students with learning differences. She also has a private practice in the Philadelphia suburbs that focuses on students making the transition from high school to college.