In Black children behaviors commonly associated with ADHD may be symptoms of trauma, depression, or stress related to difficult living situations 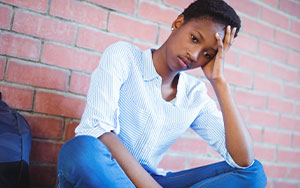 Doctors, mental health providers, teachers, special educators, and counselors are generally familiar with what ADHD looks like in White kids, especially White boys. When they see a Black child behaving similarly, they often assume he has ADHD as well, even though something else may be causing his ADHD-like symptoms.

Dr. Sarah Vinson, an Atlanta-based physician specializing in pediatric mental health and psychiatry, explains that many conditions have symptoms that look like ADHD. While ADHD might be the actual root of a child’s inattentive, hyperactive or impulsive behaviors, it could also be trauma, depression, anxiety, Oppositional Defiant Disorder (ODD) or another condition that frequently co-exists with ADHD. It could also be nightmares or flashbacks; learning disabilities; or stress from hunger, tiredness or living in overcrowded conditions.

Getting to the Root Problem

Proper assessment takes time, skill, understanding, and exploration. For accuracy, diagnosticians pair a screening instrument or rating scale for ADHD with a thorough evaluation that looks for additional explanations and symptom drivers in the context of the particular child’s family, history, and environment. It matters because wrong or incomplete diagnoses result in inappropriate or harmful treatments.

Vinson explains that considering trauma as a possible diagnosis is important for all kids, but it is critical for Black children.

“When we miss trauma in Black kids, we are doing them a terrible disservice and risk causing negative lifelong repercussions.”

Vinson points out that Black families have experienced—and continue to experience—a disproportionate burden of trauma due to years of redlining, mass incarceration and educational inequalities. Even when Black families don’t live in neighborhoods where those issues are prevalent, Black kids are more likely to be exposed to various types of trauma than White kids. And no matter where they live or how much money their families have, Black kids experience being part of a “marginalized” group every day, surrounded by messages that society associates being Black with being bad. When kids see people who look like them being harmed or killed just for being Black, it traumatizes them to the core.

Reactions to the trauma of a hostile home, school, or community where kids feel targeted, mistreated, or rejected can look like symptoms of ADHD: not completing assignments, tuning-out, feeling hopeless, agitated, anxious, restless or volatile. For example, it’s hard to know if a child is being inattentive or fidgety in class because she’s preoccupied with how her dad is doing in prison, whether there will be anything for dinner when she gets home, or what that man did to her last night; or if it’s because the songbird outside the window is distracting her.

The most pervasive trauma for Black kids comes from the distress of living in a racist society. Vinson describes “structural trauma” as when the systems entrusted to support children’s healthy growth and development work in ways that harm them instead. Schools, for instance, are meant to be safe places where all kids are encouraged to think and learn and plan for their futures. But for many Black kids, school is anything but safe.

How kids see themselves and their future impacts their academic engagement. Buying into school—having the desire and motivation to learn— relies on kids believing they’ll grow up to be adults and have opportunities for achievement. Black kids, however, often feel the world is stacked against them. They feel rejected, demoralized, and unsupported in school, where teachers focus on their deficits and fail to acknowledge or help them shore up their strengths. While lack of involvement can look like inattentive ADHD, it is frequently caused by the trauma and depression of being in a hostile environment.

Nor does irrelevant school curricula—rife with White history and White authors, artists and musicians—encourage Black kids to feel proud of their heritage or foresee available career options. When kids are bored and can’t relate to the subject matter being taught, it’s hard for them to stay attentive in class, let alone inspired to persevere with their studies.

While the rate of school misbehavior is similar for Black and White kids, the response to misbehavior is quite different. Vinson explains that our society has a hard time acknowledging “Black pain.” Teachers and administrators often lack empathy for Black kids and don’t appreciate that they might be angry or unable to control themselves because they’re being neglected or physically, emotionally, or sexually abused at home. While the impact of these intimate and disturbing events regularly follows kids to school and serves as triggers for emotionally charged behavior, school staff traditionally overlooks family or interpersonal trauma.

In addition, Black kids may feel unsafe in their neighborhoods, as well as in their homes. Vinson explains that, when kids live in communities where they’re used to having to protect themselves and where their “survival behavior” is reinforced, it’s hard for them to turn that recklessness and impulsivity off when they’re in a school setting.

In response to the strong emotions and behaviors caused by their trauma-filled lives, school personnel often fail to listen with sensitivity or to give Black kids the benefit of the doubt. Instead, they pay more attention to the problematic behavior of Black kids, see it as “more problematic” than comparable behavior in White kids, and punish it more severely. By being forced to spend their days in a school where they’re not treated as ‘fairly’ as their White peers, Black kids experience the trauma of unequal treatment.

This article is based on an ADDitude Magazine’s expert webinar, Cultural Considerations When Diagnosing and Treating ADHD in African-American Children, given by Sarah Vinson, MD, a specialist in forensic psychiatry, and an Associate Clinical Professor of Psychiatry and Pediatrics at Morehouse School of Medicine. Eve Kessler, Esq., a retired criminal appellate attorney with The Legal Aid Society, NYC, is co-founder and Executive Director of the not-for-profit SPED*NET, Special Education Network of Wilton (CT) and a Contributing Editor for Smart Kids with Learning Disabilities.