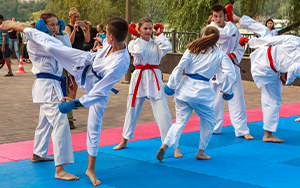 Dr. John J. Ratey, psychiatrist and world renowned authority on the effects of exercise on the brain, advises families of children with ADHD to think of exercise as medication for optimizing intellectual reasoning, increasing attention, and improving mood. For both inattentive and hyperactive ADHD, Ratey stresses that exercise sharpens focus, increases time on task, decreases impulsivity, and primes kids for learning. Exercise, Ratey concludes, should be an essential component of ADHD treatment.

Exercise intensifies the flow of blood to the brain, stimulating the release of compounds that the brain needs to function efficiently. These hormones, neurotransmitters and growth factors are often in short supply in ADHD brains. By boosting the level and balance of these chemicals, physical activity helps to regulate mood and attention, promote the growth of new brain receptors, and allow the brain to make stronger connections – all of which increase the ability to learn and the rate of learning. Below are several ways in which exercise improves brain function:

Incorporate Exercise at School and Home

Exercising before school helps reduce ADHD symptoms and prepare the brain for learning. Students who complete moderate to vigorous exercise each day before school are less anxious and do better across the board than kids who work on sedentary tasks.

Even 30 minutes of vigorous exercise can help alleviate symptoms of ADHD.

Some schools have morning physical activity programs. For example, BOKS is a school-based program of vigorous play for 40-45 minutes prior to school three days per week. Free-play and socializing are followed by a lesson plan that focuses on a functional fitness skill of the week (squats, push-ups, sit-ups), which is incorporated into fun relays and obstacle courses. After an end-of-class game that promotes community and sportsmanship, kids stretch and cool down. In a survey of parents and participants, most agreed that, when involved with the program, the kids were more excited for school, got more exercise, and ate healthier meals.

If there is no morning school-based program in your town, try getting one started. Alternatively, provide home-based options, such as walking the dog, taking a morning run through the park, jumping rope or jumping on a trampoline while waiting for the bus, riding bikes to school, etc.

Exercising in the classroom 3 to 4 times a day stimulates focus and concentration. Speak to your child’s teachers about building exercise into the school day (jogging in place, jumping jacks, etc.) and offering opportunities for kids to move around (get a drink of water; pull/push lunch box containers to the cafeteria; hand out supplies; deliver messages to the office).

Recess is especially important for kids with ADHD. It helps kids improve attention, mood and working memory, regulate behavior, and work on social skills. Make sure your child’s IEP or Section 504 Plan clarifies that physical activity improves his ADHD symptoms and supports him in meeting his specific goals/objectives. Speak with your child’s teachers to confirm he won’t be banned from athletics for poor academic performance or as a means of discipline. Instead, recommend that, if he misbehaves, the punishment should involve something that is physically active and productive, such as raking leaves or running errands.

The type of exercise doesn’t matter; what matters most is making exercise a habit. Whether it’s swimming, diving, yoga, martial arts, rock climbing, gymnastics, figure skating, ballet, fast walking, cycling, mountain biking, rowing, skateboarding, or another vigorous sport or physical activity, kids with ADHD who engage in consistent exercise routines are more creative, energetic, motivated and positive about doing tasks than those who don’t. They also sleep better thanks to physical exhaustion.

Encourage your child to pay attention to how exercise makes him feel, so he can appreciate how much better he does afterwards. Support your child in becoming involved in a physical activity he likes and has fun doing, as well as one that works for his specific ADHD profile. Once he recognizes how the new routine brings him a sense of academic, social and emotional wellbeing, he will be open to making it a consistent part of his life.

This article is based on an ADDitude webinar by John J. Ratey, MD, associate clinical professor of psychiatry at Harvard Medical School and an internationally recognized expert in neuropsychiatry. Ratey, an authority on the brain-fitness connection, is the author of Spark: The Revolutionary New Science of Exercise and the Brain.