When children are diagnosed with ADHD, they often don’t have the tools to explain it to their friends and classmates. In a webinar for ADDitude, licensed clinical social worker and ADHD expert Ryan Wexelblatt shared advice on how to help your children talk to their peers about ADHD 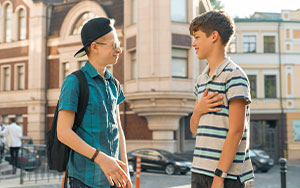 When kids are identified as having ADHD, they are often left in the dark about what that diagnosis means. They may be given a prescription for medication and a brochure entitled “What is ADHD?” But rarely are they provided with a clear, fact-based, age-appropriate explanation of what ADHD is and how it will impact them over time. Unable to fully understand the diagnosis themselves, they’re also unable to explain it to others, exacerbating fears about being “different” at a time when all they want is to be like everyone else.

Ryan Wexelblatt, a specialist who works with boys with ADHD and learning differences maintains that as parents, you play an important role in helping your child understand his diagnosis. He encourages parents to talk openly to their kids as soon as they’re diagnosed, helping them to grasp that “ADHD is a description of how their brain works; it is not their identity.”

One of Wexelblatt’s concerns is that when kids don’t appreciate how ADHD impacts them or have the ability to explain it, they end up making self-defeating comments to their peers (“I’m stupid”; “I’m an idiot”). Or they might turn their ADHD into a joke, laughing it off because they feel needlessly ashamed or embarrassed. For example, when a peer asks, “What’s wrong with you?” they might just snicker and say, “Where should I begin?”

As your child gets older, social expectations increase. When peers don’t realize what’s causing your child’s inappropriate behaviors, they will likely become less tolerant. If, on the other hand, your child can explain his ADHD— and especially if he can attach behaviors to the explanation—his peers will have a context for his actions, understand them better, and be more empathetic.

Wexelblatt counsels against referring to ADHD as a “superpower” or “gift.” He believes that sugarcoating ADHD takes away from the clarity of the description.  Although he acknowledges that some ADHD traits can be helpful, he notes that, given the challenges ADHD presents and the tremendous effort it takes to manage them, most kids come to realize that ADHD is not their gift of choice.

Most important to Wexelblatt is that you, as parents, are able to give your children the language to explain ADHD to their peers. He suggests that you choose age-appropriate language and offer your child choices (“Which explanation sounds most like you?”). That way, your child will be able to take ownership of the language and feel comfortable using it with other kids.

Following are several explanations to give your child, all of which can be modified for his age and abilities.

When someone has ADHD, part of their brain makes it hard for them to pay attention to topics that are difficult or to sit still for subjects they find boring. Math is like that for me. That’s why I space out or go to the water fountain during math class. And that’s why the teacher touches my shoulder or calls my name to get me to pay attention.

My ADHD makes it hard for my brain to picture what I have to do in the future.  That’s why a lot of times I forget to bring my homework to class (or hand in my homework) even though I’ve done it.

My ADHD brain makes it hard for me to regulate my emotions. That means it might be tough for me to figure out the difference between a little problem, a medium problem, and a big problem.  As a result, I sometimes get mad or yell at you. Afterwards, I realize it wasn’t a big deal and I feel bad about it.

This article is based on the ADDitude expert webinar, Having the Talk, by Ryan Wexelblatt, LCSW, school social worker, and ADDItude contributor. Eve Kessler, a retired criminal appellate attorney, is Executive Director of SPED*NET, Special Education Network of Wilton (CT), and a Contributing Editor of Smart Kids.