Children with LD or ADHD should not be punished in school for behaviors associated with their disabilities • If behavior is a problem, the student should be given a functional behavioral assessment (FBA), the results of which should be incorporated into his or her educational plan 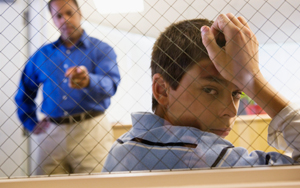 These students’ behaviors may sometimes challenge traditional school norms. They may be impulsive, overreact, fail to exercise restraint, exhibit poor social judgment, and lack emotional control. They may interpret the actions of others as unfair, embarrassing, or threatening, and become agitated. At times, their lack of control can escalate to the point of becoming unsafe to themselves and others, or they may engage in risky behaviors to gain social acceptance.

Ultimately, school personnel have to step in as disciplinarians. Often, their approach focuses on eliminating unwanted behavior through automatic application of increasingly negative consequences. In those circumstances, rigidity meets rigidity, and the opportunity to teach flexibility and self-control skills is lost.

Parents of children with learning differences must know their children’s rights in order to protect them from inappropriate punishments at school.

To formulate an appropriate response to bad behavior, the school needs to understand the behavior in the context of how the child is processing the situation. For example, negative behavior could be triggered by a number of factors: feeling shame, being told to do a particular task, or a simple annoyance such as a classmate tapping a pencil. A student may tolerate something one day and not the next because he’s tired, hungry, upset by a prior event, or he’s simply having a bad day. This variability can be perceived as proof that the behavior is intentional and provocative.

If a child with LD or ADHD has behavioral issues, the IEP should mandate a functional behavior assessment (FBA) leading to a behavior plan that uses positive behavior interventions and supports.

School response to misbehavior of a student with a disability should be proactive rather than reactive. An FBA looks at the root causes of the behavior, both interpersonal and environmental, as well as the effectiveness of consequences imposed. The FBA should result in a behavior intervention plan that both minimizes triggers and equips the student with adaptive skills.

The Most Challenging Cases

Unfortunately, the statutory mandate for positive behavioral interventions and supports is frequently violated as administrators often resort to increasingly severe sanctions, such as suspension, expulsion, police referrals, or arrest in an effort to deal with serious misbehavior.

Parents whose children are arrested need to stress their child’s disability and the obligation of the school to deal with it.

Several years ago Congress changed the IDEA to provide further protections in the form of “manifestation determination requirements.” If a student is to be suspended for longer than 10 days or expelled, the child’s IEP team must meet to determine whether the behavior was a manifestation of the child’s disability. The team (including parents) must determine if the conduct was caused by or related to the child’s disability, or if the conduct was the direct result of the school’s failure to implement the child’s IEP. In either case, the child should not be subject to discipline in the same manner as a non-disabled child. For a child with a disability, the expert opinion of a psychologist or psychiatrist is needed to determine if the behavior was a manifestation of the child’s disability. Put simply, the usual rules, such as “three strikes and you’re out” don’t apply.

Parents should be aware that children should not be punished for behavior resulting from a disability. You have the right to demand that the school has sufficient understanding to reduce the triggers for misbehavior and to teach the student how to adapt. With education and understanding, the risk can be reduced and positive development enhanced.

However, even the best behavior plan will not guarantee good behavior, so it is important that parents know the systems that exist to protect their children.

Marcia Eckerd is an evaluator, consultant, and therapist who specializes in working with children with NLD and autism-spectrum disorders. Andrew Feinstein is an attorney whose practice focuses on representing children with disabilities and their families in securing a free appropriate public education.