In a well-intentioned—but misguided---effort to protect our children from failure, we’ve created a generation lacking the skills to overcome adversity • But it’s never too late to change the dynamic • Here’s how to get started helping your children develop grit, the quality that will allow them to live their best lives 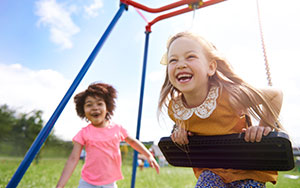 The self-esteem movement of the 1980s had a tremendous impact on how the millennial generation was raised. Believing that high self-esteem led to positive social, emotional, and mental health, parents and educators bubble-wrapped their children, shielding them from stress, adversity, risk-taking, and anything else that might hamper their burgeoning self-confidence.

While we are all invested in the well-being of our children, the self-esteem movement’s mindset of fear and safety took the desire to protect our kids to the extreme. It started on playgrounds with plastic slides and woodchips. Schools began to prohibit tag at recess, give “participation” trophies to all kids, ban the selection of valedictorians, and sanitize reading lists. States removed parallel parking from their driving tests. Nike created Velcro-closing sneakers. Kids stopped climbing trees. Colleges created “safe spaces,” where students could watch puppy videos in the dark while eating cookies. Emotional support and comfort animals became a mainstay on airplanes. Everyone was “awesome.”

But the “awesomeness” movement backfired. Eliminating adversity from children’s lives hindered them in the long run. Rather than raise resilient risk-takers, we created fragile, narcissistic young adults with underdeveloped critical thinking skills and the inability to handle adversity.

What we truly want is for our kids to be motivated to do their best, to persist with more courage than fear, and to be prepared to overcome obstacles in their path.

Research shows that grit could be the key ingredient to a flourishing life. The happiest people face hard goals with passion, perseverance, purpose, and humility. They help and inspire others. They have will power and the capacity to delay gratification. When something matters to them, they have the ability to pick themselves up and develop a mindset that keeps them going, even when they don’t want to keep going—to cultivate grit in the face of failure.

Grit is not talent or luck. As defined by positive psychology expert and author Caroline Adams Miller, “authentic grit” is the passionate pursuit of hard goals that awes and inspires others to become better people, to flourish emotionally, take positive risks, and live their best lives—to “shoot for the moon” by focusing on a cause greater than themselves; “ordinary grit” is the pursuit of extraordinary goals in everyday life by everyday people.

Following are some strategies to help your kids become their best selves. These also serve as a reminder that grit isn’t just for kids.

Remember that, even if you have enabled your child in the past, there is never a wrong time to demand a different kind of excellence and perseverance from her—and from yourself as well.

This article is based on How to Cultivate Grit in Your Kids… And Put the AWE Back in AWESOME, a presentation by Caroline Adams Miller, MAPP, speaker, consultant, educator and author of Getting Grit: The Evidence-Based Approach to Cultivating Passion, Perseverance, and Purpose. Eve Kessler, Esq., a criminal appellate attorney with The Legal Aid Society, NYC, is co-founder of the not-for-profit SPED*NET, Special Education Network of Wilton (CT) and a Contributing Editor for Smart Kids with Learning Disabilities.