For children with LD, school can be an alienating experience ∙ Unless parents and teachers intervene to make changes in their environment, these kids are at increased risk for developing social adjustment problems 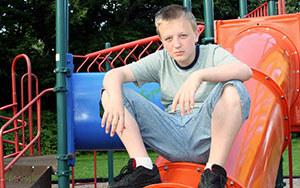 Many children with LD and ADHD are social by nature and have appropriate interests in relationships and social activities. Nevertheless, as a group, they are more isolated than children who do not have disabilities. Though less likely to participate in group activities, those who do are often described as bossy, rude, standoffish, impulsive, ill-mannered and disrespectful.

As the following examples illustrate, social adjustment issues can manifest themselves throughout the educational process. But regardless of the student’s age or grade, it’s crucial that parents and educators figure out the reasons for the antisocial behavior and develop measures to counter it.

Brad is in second grade. He works with an aide for language arts and social studies. He spends one period a day in the Resource Room. The reading groups in class are named after animals. Brad and another student are Snails. On the first day of school, all the students made name signs, which the teacher laminated and taped to their desks. Brad’s is creative and colorful, but it says, “Brab.” His mother is worried because her son comes home in a bad mood every day and won’t join any after-school activities.

Though he is only seven years old, Brad’s social responses seem more appropriate than his teacher’s. He feels stupid because of the insensitive name of his reading group, the fact that classmates point to his name sign and giggle, and during recess children call him a “resource room dummy.” Brad’s dyslexia has nothing to do with his IQ. He is smart enough to avoid his classmates in extracurricular activities. Although he would probably enjoy sports or Cub Scouts, Brad isolates himself for self-protection.

Danny’s middle school teacher is quick to describe his behavior on a field trip: “Danny is impossible to control. He’s impulsive, disrespectful and ill-mannered. He embarrasses us on every class outing.”

Though characterizing Danny accurately, his teacher does not understand that his nonverbal learning disabilities (NLD) prevent him from knowing when to enter a conversation and when to stop talking. He can’t read social cues so he laughs at inappropriate times, hoping to be on target once in a while. He doesn’t understand subtleties like facial expression, posture, tone, and volume in dynamic situations, so he may seem disrespectful when he does not intend to be. Since Danny is easily overstimulated by crowds and commotion, he disappears to decompress, leaving the teacher to think he’s rude and willful.

Because the girls laugh at Julie for her lack of fashion sense, she eats lunch alone in the cafeteria every day.

Jason would love to see a movie with the guys, but he’s too afraid of rejection to make a phone call.

Some children with LD are so accustomed to failure in school that they simply assume they will fail at everything. Like Julie and Jason, they can become increasingly lonely and depressed. These feelings lead some teens to consider anti-social behaviors such as becoming class clowns, or experimenting with drugs, physical abuse, self-mutilation, truancy, or unsafe sex. To them, the risks seem minimal when compared to the rewards of being noticed by social groups that have ostracized them for years.

Dealing with the Issue

Despite these alarming possibilities, there are positive interventions and environments that can enhance social development for children with LD. Social skills curricula based on consistent programs of positive behavioral reinforcement benefit all children, but particularly those with fragile social agendas. These students thrive in schools that place social, emotional and adaptive functioning on the regular educational docket.

Children should be taught the social behaviors they need to progress through school as naturally as they are drilled in the skills they need for increasingly complex academic function. Social skills deficits can be crippling. It seems only logical that social skills instruction is as fundamental to the educational framework as the rudiments of reading, writing, and arithmetic. Only then will students of all learning styles have the opportunity to succeed in the social arena as well as in the classroom.

The late Marcia Rubinstien was an educational consultant and the author of Raising NLD Superstars.