Dr. Ross Greene, the foremost authority on Oppositional Defiant Disorder, argues that children do not want to be difficult, but they do not have the skills necessary to manage their frustration • Addressing ODD requires a collaborative approach between adult and child rather than the more common confrontational approach 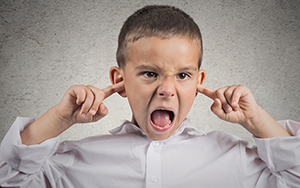 “If there is one thing I want you to take away today,” Dr. Ross Greene tells an audience he is addressing, “it is this: Children learn if they can. If they can’t learn, we need to figure out why.”

Few people are more qualified than Greene to draw that conclusion. An Associate Clinical Professor in the Department of Psychiatry at Harvard Medical School, Greene has spent the better part of his career studying children who exhibit disruptive behavior, often referred to as Oppositional Defiant Disorder (ODD). Much of his work developing what he terms the Collaborative Problem Solving Approach to helping these children has been distilled into three books, The Explosive Child, Lost At School, and the newly published Raising Human Beings.

Greene harbors no illusions about children with ODD. He characterizes them as irritable, inflexible and explosive, yet, he maintains, they do not choose to be that way. Once parents recognize that their oppositional child is not behaving in a purposeful, manipulative way, it allows them to change the way they deal with the behavior. It frees them to figure out what skills their child lacks to respond appropriately, and to provide them with those tools.

“If adults are willing to work with kids on the causes for their maladaptive behavior,” says Greene, “it will change.”

According to Greene, 80% of non-compliant, explosive kids are diagnosed with ADHD. Alternatively, he suggests, a child may be developmentally delayed with regard to flexibility, adaptability and frustration tolerance or lack crucial cognitive and emotional skills. But whatever the problem is, it is not one of motivation. As Greene notes, “I teach skills—not motivation.” The lack of such skills, he says, should appropriately be characterized as a learning disability.

Greene identifies a number of “pathways” that may lead to the development of ODD, including problems with executive skills relating to planning, initiating and carrying out actions; and with language processing skills—a frequently overlooked cause of ODD. Other pathways include problems with emotional regulation, cognitive flexibility, and social skills.

Most of the problem-solving methods Greene proposes involve language. The regulation of emotion to control a child’s irritability, however, is generally accomplished with the use of medication. But, he cautions, starting medication does not make up for the years of schooling and skill development a child may have missed.

As with most behavior problems, Greene emphasizes that there is no quick fix or “cookie cutter” solution to these children’s difficulties. But adults can choose how to respond to children whose meltdowns, he maintains, are highly predictable. Once the triggers are known, ways to avoid them can be implemented.

A child will most often become frustrated as a result of an adult’s command, a change in plans, or a disagreement. Rather than trying to impose their will via a punishment and reward system or simply avoiding confronting the issue (the “drop-it-for-now” approach), Greene advises parents to take a collaborative approach and include the child in solving the problem.

The key, Greene concludes, is to discover the factors that are behind the child’s inflexibility and poor frustration tolerance; that, he adds, may require a comprehensive assessment. Once the underlying issues have been determined, it is important to set priorities for dealing with threatened meltdowns. Is the issue important enough to have a meltdown over? Is it unimportant enough to walk away? Or does it offer an opportunity to train a child in critical problem-solving skills? When adults choose the third option the child will begin to learn how to think and stay calm while frustrated.

Benefits for Kids with NLD
Although developed initially as treatment for children with ODD, Greene’s collaborative problem-solving approach has also been used effectively in treating children with bipolar disorder and nonverbal learning disabilities (NLD). Difficulty with cognitive flexibility, Greene notes, is the core problem of NLD. Children with NLD are very literal, concrete and inflexible, “black and white kids in a gray world,” as he describes them. They are very good at factual information and rote learning skills, but cannot tolerate unpredictability. It makes sense, therefore, to teach them how to be more flexible.

Learn more about Greene’s work and the Collaborative Problem Solving Approach at www.livesinthebalance.org.