Not being part of the in crowd can leave children feeling hurt and vulnerable, especially when a powerful clique turns on them • Parents, teachers, and other adults must make a concerted effort to support and protect children in this position, while working to change the culture that enables it 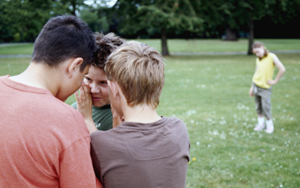 Has your child ever been excluded or mistreated because he was different from the powerful insiders at school? If so, he’s not alone.

Research shows that highly creative students with learning differences are far more likely to be excluded or teased than other students. As if being singled out isn’t bad enough, the majority of these kids don’t know how to respond effectively when they find themselves the victims of verbal abuse or rude treatment.

While you may not be able to prevent all harassment, there are actions you can take that will help empower your child to manage and minimize teasing, bullying, and being ostracized by others.

With a young child, start by setting up a playdate with someone you know who has similar interests or hobbies. For an older child, offer the opportunity to get together for a fun activity. Think about the movies, plays, music events, video games, amusement parks, creative projects, or outdoor adventures that bring out your child’s best qualities, then make a list of open-minded kids who enjoy those same activities. Reach out one at a time until there are one or more events your child can look forward to in the coming weeks.

Yet these resilient and persistent individuals achieved great success as adults and impacted the world in positive ways because they were able to turn their unique outsider perspective into an asset. Point out those lessons to your child and suggest that instead of berating himself for not easily fitting in with the narrow-minded cliques, the experience of being an insightful outsider and a true original is preparing him to do something important later in life.

Knowing that there are people who appreciate her will help to immunize your child against the teasing comments and nasty exclusions from school cliques. On tough days when she feels the brunt of their bad behavior, encourage her to call or write a “please keep this secret” email or text message to someone in her support circle along the lines of, “Hey, do I have any redeeming qualities I should know about? I just got dissed by one of the nasty clones from the popular clique at my school and I’ve forgotten for a moment who I am.”

The simple act of sending out this private message to someone she can trust will begin the healing process. Then when her knowledgeable mentor, friend, or family member offers details about why they prefer your child’s strengths and good qualities over the cruelty and pettiness of the clique members, she will be able to get back on track toward achieving her goals and dreams.

Leonard Felder, PhD is a licensed psychologist and the author of numerous books, including Fitting In Is Overrated: The Survival Guide for Anyone Who Has Ever Felt Like an Outsider. Felder is also the parent of a son with learning difficulties.