ADHD is a common childhood diagnosis, affecting up to 11% of U.S. children and adolescents • The causes of ADHD are still unknown, but research suggests a genetic component is involved • While there is no cure for ADHD, treatment can alleviate symptoms that interfere with success in school and in life 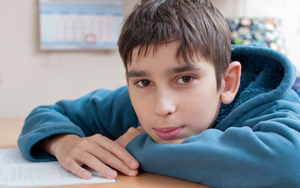 ADHD is the diagnosis for an array of difficulties, but the common thread that unites them is difficulty in regulating attention—paying the right amount of attention for the appropriate amount of time. In addition, symptoms typically include distractibility, and often impulsivity and/or hyperactivity.

Attentional issues are among the most common disorders affecting children. Recent studies show that approximately 11% of U.S. children ages 4 to 17 have an ADHD diagnosis. On average children are diagnosed at age 7, though research suggests that severe cases are often diagnosed earlier, while girls are frequently not diagnosed until puberty.

Boys are three times more likely than girls to be screened for ADHD. Girls with ADHD may not act out in the classroom as boys often do, and therefore are not referred for evaluation as often as their male peers. Girls with ADHD may be quiet and cooperative, hoping not to be noticed. They may also present with physical complaints, anxiety, dreaminess or extreme disorganization.

Science has yet to determine what causes ADHD, however there is growing evidence to suggest that genetics plays a key role. Other potential risk factors include environmental exposures (e.g. cigarette smoke and alcohol in utero, and lead in childhood), brain injury, premature delivery, and low-birth weight.

Like other learning disabilities, ADHD cannot be cured, however many of the problematic symptoms can be treated so that children (and adults) can lead productive lives. The most successful treatments involve a combination of medication, behavioral therapy, and educational interventions.

Strengths
Children with ADHD tend to have a great deal of energy and curiosity. They often function best when problem-solving, figuring out how things work and seeking insights beyond rote learning. They’re “big picture” thinkers, more interested in searching for relevance, meaning, and understanding relationships than names, dates, and other bits of information.

Not all children with ADHD display the same behaviors. There are three subtypes of ADHD. If your child falls into one or more of these categories consider having him or her evaluated for ADHD.

Most children have combined hyperactive-impulsive and inattentive ADHD.