Dysgraphia is a learning disability that results in difficulty with written expression • Children with dysgraphia are able to express themselves fluently orally, but they can’t transfer their ideas to the page • Because they find writing arduous, they may avoid doing it 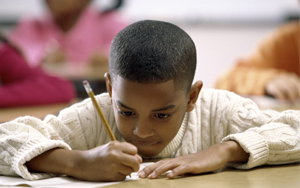 Children with dysgraphia struggle to write, often causing them to experience emotional stress and anxiety. Because they have good verbal skills, parents and teachers expect them to write at the same level as they speak; when they don’t, they may be mistakenly thought of as lacking motivation or careless.

Dysgraphia can occur alone, or in children who also have dyslexia, other language disorders, or ADHD.

Your child’s writing might include language problems such as omitting words, and incorrect word usage. Non-language problems could include issues with motor skills such as poor pencil grip and coordination, difficulty forming letters, or spacing letters even if letter formation is adequate. Other tell-tale signs of dysgraphia include:

Writing is a complex process. It involves working memory and shifting among tasks that include generating ideas, thinking of words and word meaning, organizing good sentences, planning, and self-monitoring—all executive functions. Difficulty in any of the basic language or motor skills or in the executive functions needed to combine them end with the same result: problems with written expression.

In addition, difficulty controlling fine motor skills, sequencing the hand movements needed to write, or controlling spatial accuracy can cause non-language based dysgraphia.

It is critical to identify the underlying problems resulting in dysgraphia; there might be more than one. An Occupational Therapist using a multi-sensory approach can address problems with handwriting, motor sequencing or visual spatial skills. A Speech and Language Therapist or a Special Education teacher can help with language-based problems such as the mastery of grammar, word usage, sequencing, and composition of sentences. A Special Education teacher will work with tools such as a graphic organizer, thought bubbles, and other strategies to help deal with specific executive function problems.

Accommodations are often needed to help dysgraphic children handle written work, including reduction of the load of writing in class and in homework, extended time to produce written work, and assistive technology to allow dictation.

Most dysgraphic children benefit from being allowed to use a keyboard and a word processing program, which reduces motor demands and allows them to edit and reorganize written work. Since writing is difficult, children benefit from Smart Boards on laptops or tablets to record writing on the board, and accommodations for note taking, such as using another student’s notes or a study guide/outline of lecture information provided by the teacher. Many children with dysgraphia are allowed to use alternative methods to demonstrate knowledge rather than written exams.

Demands for written expression are constant across every subject and increase in every grade. Even in early grades, teachers need to be sensitive to dysgraphia when assigning projects to produce posters to be hung on the classroom walls or to write letters correctly on the lines. Children with dysgraphia need encouragement and remediation; there is nothing more discouraging than getting a paper back filled with red circles, corrections, and criticism.

Children with dysgraphia have problems producing writing, but their intelligence is normal. Many bright children with dysgraphia are unable to keep up with the written work required by classes that are the most appropriate for them intellectually. All too often they are placed in classes requiring written work at the level of their ability to produce writing, rather than given the accommodations needed to be in classes that interest and engage them.

Marcia Eckerd is an evaluator, consultant, and therapist who specializes in working with children with NLD and autism-spectrum disorders.