For various reasons fathers are frequently skeptical when their kids are diagnosed with learning challenges • Their reluctance to accept an LD or ADHD diagnosis may exacerbate negative behaviors at home and at school • To overcome the problem, Ryan Wexelblatt, an expert who specializes in boys with ADHD, also works with dads to help them better understand their child’s challenges 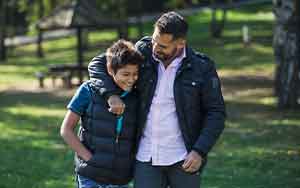 Fathers often have difficulty accepting that their child has learning differences. For some, the idea of having an “imperfect” child threatens their sense of competence or self-worth; for others—especially those who struggled with learning issues themselves—the thought that their DNA might be “to blame” is more than they want to admit. And then there are those who don’t understand that ADHD is not a behavior choice: “My son is just being lazy; he can focus on Minecraft for hours at a time, but when I sit with him to do math or ask him to clean his room, he can’t do that for 10 minutes.”

Ryan Wexelblatt knows these dads. As a clinical social worker who specializes in working with boys with LD and ADHD, Wexelblatt comes across skeptical dads so often that he’s developed educational materials geared specifically to fathers who don’t believe that ADHD is real or are in denial that their child has it.

Wexelblatt has found that sons with ADHD are desperate for their fathers’ attention and approval. In his experience, kids who feel supported and encouraged by their fathers, are more likely to show improvement in their behavior.

“The best thing you can do for your son is to help him understand that you want to support him by learning about how his brain works.”

If, on the other hand, Wexelblatt warns, fathers continue to deny the existence of ADHD, see their son’s behavior as a weakness or a failure, and respond with disdain or indifference, their parent-child relationship may be negatively impacted for years to come. Instead he counsels dads to “Take a little time, do a little research, shift your mindset, and let your son know that you’re trying to understand his brain better because you want to help him, help your relationship, and make life at home easier for all of you.”

Wexelblatt encourages fathers to understand that ADHD is not a character flaw and has nothing to do with intelligence. Rather it is a neurological problem in which the part of the brain responsible for executive functions (planning, problem-solving, impulse-control, self-awareness and social maturity) is developmentally lagging same-age peers without ADHD by about 3 years.

Once fathers understand the science of ADHD, they are better able to accept their child’s diagnosis and help him develop the skills he needs to manage his challenges.

Following are some of the day-to-day skills that may be a challenge for your child:

1.  Self-directed talk: the ability to have an internal monologue. The ADHD brain works in two ways: It’s either hyper-focused on things of interest or losing focus because things are not interesting. Playing Minecraft for three hours is enjoyable and interesting, resulting in hyper-focus. But his brain lacks the ability to push through things that are not interesting. He’s unable to say, “This homework is boring, but I need to stick with it because that’s what’s expected of me now.”

2.  “Feeling” time: the ability to plan for and keep in mind future events. At school, we teach kids how to tell time, but we don’t teach them how to monitor time. Kids with ADHD lack an internal sense of time. For example, if your son has ever said, “I can’t do this math worksheet because it’s going to take three hours,” it’s because he genuinely doesn’t understand how long something is going to take. Rather, he thinks tasks will either take much longer or much shorter than they actually will.

3.  Social thinking skills: the ability to think in a social context and apply skills relevant to the situation. Social skills thinking encompasses perspective-taking—being able to think about other’s thoughts, feelings and intentions, and how you come across to others.  If your son tends to have one-way conversations and “talk-at” people about his interests or if he becomes smothering with peers and doesn’t understand he’s coming across as being offensive, it’s because his perspective-taking skills are lagging.

4.  Non-verbal working memory: the ability to hold visual imagery in your mind and picture things in the future. For instance, when you say, “Clean up your room,” and your son gets upset and doesn’t know where to start, it’s because he cannot mentally visualize what his room is supposed to look like when it’s clean and his brain can’t sequence the steps he’ll need to go through to clean his room.

5.  Episodic memory: the ability to learn from past experiences. The ADHD brain cannot quickly connect the present with past experiences and emotions. Consequently, your son might find himself in the same situation he was in before but be unable to recall how the experience played out. As a result, he won’t understand that if he was successful in the past, he should apply information he used then to be successful in the future—and if he was unsuccessful, he should not repeat his ineffective actions again.

This article is based on an ADDitude expert webinar and videos by Ryan Wexelblatt, a licensed clinical social worker and school social worker who contributes expert Q&As to ADDitude’s series ADHD in Boys and facilitates the ADHD Dude Facebook Group and YouTube channel. Eve Kessler, Esq., a recently retired criminal appellate attorney, is Executive Director of SPED*NET, Special Education Network of Wilton (CT), and a Contributing Editor of Smart Kids.