For kids with NLD, tone of voice is one of many nonverbal cues that often elude them, leading to misinterpretation and miscommunication • Working with a professional can help them learn to better decipher the intonations of others as well as express themselves in a way others find easier to understand 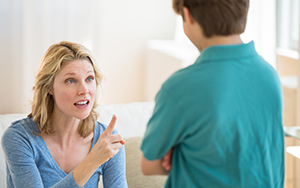 A characteristic of NLD is the inability to pick up on nonverbal cues. Most often the focus (and intervention) is on cues having to do with facial expressions, body language, and gestures. What many don’t realize is that tone of voice is also a nonverbal cue that is often misinterpreted by children with NLD.

I’ve worked with NLD kids (and adults) who interpret many tones of voice as angry or negative. For example, one 10-year-old complained that his parents yelled at him constantly. When I met with the child and his parents together, I saw that when they spoke in an urgent or serious tone (“We need to go now”), he accused them of yelling. Not surprisingly, he would become upset and yell back, at which point his parents did start yelling at him, and a fight would ensue—all because the tone of their conversation had been misinterpreted.

Understanding inferences and sarcasm is another area that often befuddles people with NLD. One could say “Get out of here” in a way that is unfriendly, or one could say the same words with a tone that is teasing, meaning “I can’t believe that.” A child with NLD may not be able to tell if someone is teasing, and again, he may assume a negative intention. Likewise, he may be mystified when others laugh because he’s missed the humorous tone.

It’s not just the tone of others that is problematic for kids with NLD; they also may be unaware of their own tone of voice. I worked with a teenager who sounded aloof even when he didn’t intend to. His tone tended to go up in a way that sounded impatient or rude. This caused others to react negatively toward him. Family members, friends, and teachers get angry when they perceive someone’s tone as rude.

What Can Be Done

If your child has difficulty in this area, consider working with a speech and language therapist who can help him listen to and identify different intonations. Role-playing–saying the same word with different feelings–may also be helpful. Volume can be practiced by speaking at various volumes or listening to someone else go through various volumes, sometimes at different distances.

It’s important to intervene not only with the NLD child experiencing the problem but also with those who interact with him. As noted previously, listeners often interpret the tone of the speaker as being rude or hostile when that isn’t the case. Rather than making that assumption, it’s much better to clarify what’s being said and the intent. They can also learn to recognize when the individual is misinterpreting them, and correct rather than respond to the feeling. This helps to prevent situations from escalating.

People seem to respond immediately to tone of voice. Even when families, parents or teachers are aware of the problem, it can take time for them to “get” when it’s happening, so I find teachers, families and individuals with NLD reacting to each other rather than understanding. Happily, there are ways to improve this, which makes communication more accurate and effective.

Marcia Eckerd is an evaluator, consultant, and therapist who specializes in working with children with NLD and autism-spectrum disorders. This article originally appeared on PsychCentral.com as “Are You Yelling?” Aspergers, NLD & Tone All rights reserved. Reprinted here with permission.