Research shows that kids with ADHD are particularly vulnerable to screen addictions and the negative effects that follow • Design elements intrinsic to digital media play into the neurobiology of the ADHD brain, heightening the risk for negative impacts from electronic devices 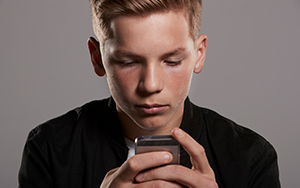 Kids are fascinated with screen devices and the rich array of digital platforms available. But when it comes to kids with ADHD and learning challenges, smartphones, iPads, and screen-based activities have a particularly strong hold. With excessive use, kids may become unable to control their actions, and an entertaining diversion may slip into a behavioral addiction, with potentially negative consequences.

We’ve known for a while that adolescents with ADHD have an increased risk of substance abuse and impulse control disorders. We now know that they are also at greater risk for screen-based dependencies: where the general population has an approximately three-hour per day screen-time use, those with ADHD have a more than six-hour per day habit. The connection between ADHD and screen-addictions starts young and impacts a large swath of people with attention deficits.

From elementary school on, ADHD is the most meaningful predictor of gaming and screen-time addictions, with 25% of the global ADHD population impacted.

Why are kids with ADHD particularly vulnerable to screen-based obsessions? Primarily, the underlying neurobiological complications associated with ADHD make activities based on the glowing digital screen appealing and often addicting.

ADHD brains are dopamine-deficient. It takes more of everything to motivate them. As kids with ADHD are rewarded during digital play, they anticipate further pleasure and seek out ever more of the rewarding, addictive behavior.

In addition, as the creators of video games and social-media platforms acknowledge, the very structure of the screen-based activities taps into the ADHD brain’s susceptibility for overuse, often exacerbating ADHD symptoms. Here’s how:

In short, the strong reinforcing character of screen-based activities plays into areas of concern for kids with ADHD: impulsivity, need for immediate rewards, and difficulty maintaining attention.

Gaming and screen-based addictions cause myriad problems, both in and out of school including fatigue and poor sleep patterns; troubled personal relationships and social interactions; hostile reactions to parental attempts to set limits; and declining school performance.

As with other forms of addiction, kids with ADHD often rely on screen time to escape reality, alleviate negative moods, or combat perceived social isolation. They may develop a tolerance for the reinforcers and experience symptoms of withdrawal, such as irritability, anxiety, or sadness. They may deceive others about the amount of time they spend on screens; be unable to control their behavior and continue with excessive use, despite experiencing problems; and grow preoccupied with games or social media, losing interest in other more appropriate activities.

At the very least, excessive time spent on screens is time lost to developmentally important skills. For kids with ADHD, leisure time could be better spent filled with activities that require creativity and initiative: complex play, music lessons, art projects, and participation in clubs or sports.

Those types of learning and socializing activities provide increased opportunities to build the skills necessary for leading a balanced life: Life skills such as teamwork, friendships, self-regulation, self-discipline, self-control, working memory, and executive function abilities are generally not developed through excessive use of screen-based activities.

In order for parents to allow their kids with ADHD to experience the benefits of screen-time without becoming addicted, they must learn to manage their kids’ forays into the digital world.

Learn More
Understanding the relationship between ADHD and excessive screen time is a relatively new field of research. To learn more about this behavioral addiction and ADHD, access the following articles:

Eve Kessler, Esq., a criminal appellate attorney with The Legal Aid Society, NYC, is co-founder of SPED*NET, Special Education Network of Wilton (CT), and a Contributing Editor of Smart Kids with Learning Disabilities.