Sensory Processing Disorder is an often-misunderstood, misdiagnosed problem that can impact the way children learn • SPD is an umbrella term that refers to various disabilities • Because SPD is not considered a learning disability, these children do not qualify for Special Education services • As with learning disabilities, early intervention is likely to produce the the best outcomes 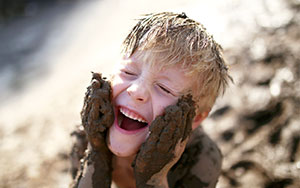 Surely, you know a child who is oversensitive, clumsy, picky, fidgety, and out of sync. That child may have Sensory Processing Disorder (SPD), a common but misunderstood problem that affects children’s behavior, influencing the way they learn, move, relate to others, and feel about themselves.

SPD (also called Sensory Integration Dysfunction) is not one specific disorder, but rather an umbrella term that covers a variety of neurological disabilities. The result is that the child cannot respond to sensory information to behave in a meaningful, consistent way. He may also have difficulty using sensory information to plan and carry out actions that he needs to do, impacting his ability to learn. Inefficient sensory processing leads to inefficient learning.

Sensory Processing Disorder is the inability to use information received through the senses in order to function smoothly in daily life.

Because the child with SPD has a disorganized brain, many aspects of his behavior are disorganized. His overall development is disorderly, and his participation in childhood experiences is spotty, reluctant, or inept. For the out-of-sync child, performing ordinary tasks and responding to everyday events can be enormously challenging. The inability to function smoothly is not because the child won’t, but because he can’t.

Difficulties with touch, movement, and body position are the telltale signs of SPD. There are three main types of sensory modulation problems.

The overresponsive child seeks less stimulation—avoids touching or being touched, and moving or being unexpectedly moved. The child may be rigid and uncoordinated. For example:

Tommy is a fussy 3-year-old. He is crying because his shoes are too tight, his socks are too lumpy. Everything scares him or makes him miserable. He hates the playground, the beach, and the bathtub. He refuses to wear hats or mittens, even on the coldest days. Getting him to eat is a trial. His teacher reports that he avoids painting and other messy activities. He fidgets at story time, lashes out at his classmates for no apparent reason. He is, however, the world’s best block builder.

The underresponsive child seeks more stimulation—may be unaware of a messy face, hands, or clothes or of how things feel; does not notice or object to being moved; lacks an inner drive to move for play, but becomes more alert after pushing, pulling, or lifting. For example:

Vicki, a first grader, bumps into furniture and stumbles on grass. A family outing or trip to the playground quickly wears her out. Her parents find that getting her out of bed, asking her to put on her coat, or maneuvering her into the car is an ordeal. Although Vicki lacks “oomph,” she becomes livelier after getting into unusual positions – rocking forward and backward on all fours, hanging over the edge of her bed upside down, swinging on her tummy. Her teacher says, “Vicki has difficulty socializing and getting involved in classroom activities. She needs a jump start just to get going.”

The sensory-craver seeks constant stimulation—wallows in mud, rummages purposelessly through toys, rubs against walls and bumps into people. The child is a daredevil, craves fast and spinning movement, moves constantly, and gets into upside-down positions; and craves bear hugs and being squeezed and pressed. The child may also respond in atypical ways to sights, sounds, smells, and tastes. For example:

Sebastian, age 8, fidgets constantly. At school, he riffles book pages, twiddles with markers, taps rulers and breaks pencils. He clicks his teeth and chews his collar. His knees bounce, his feet tap. He squirms in his seat and jumps out of his seat every chance he gets. His nonstop activity distracts his classmates and teacher. Sebastian craves sensations: He is the child who’s “gotta touch,” even when it should be clear that touching is inappropriate.

Another category of SPD is Sensory Discrimination Disorder, or difficulty in distinguishing one sensation from another, or in understanding what a sensation means. Children may have difficulty with touch (poor body awareness, including sensations of pain and temperature), movement and balance, body position and muscle control, sight (confusing likenesses and differences in pictures), sounds, and tastes (e.g., distinguishing between the lemons, vinegar, or soap).

This category of SPD includes both Postural Disorder, involving problems with movement patterns, balance and bilateral coordination (using both sides of the body together), and Dyspraxia—problems performing coordinated and voluntary actions, including both fine- and gross-motor planning.

Many symptoms of SPD look like symptoms of other common disabilities. An alternative diagnosis may be that the child has ADHD, learning disabilities, poor auditory or visual discrimination, speech/language problems, allergies, nutritional deficiencies, an emotional problem—or that he is behaving just like a typical child! Some children have SPD in addition to one or more other disabilities.

While SPD may affect the child’s auditory, visual, and motor skills, and the ability to process and sequence information, it is not, at present, specifically identified as a qualifying disability, making a child eligible for special education and related services.

“Will my child become an out-of-sync adult?” Not necessarily, if he or she receives understanding, support, and early intervention in the form of occupational therapy in a sensory integration framework. As children grow, their brains become less malleable and their unusual reactions to sensations become more established. However, even older children and adults benefit from therapy.

Treatment helps the child to:

Without treatment, SPD persists as a lifelong problem, interfering with the child’s friendships, ability to learn, and with the interactions and coping skills of everyone in the family.