Students with LD and ADHD are suspended from school at greater rates than their peers without learning challenges • Increasingly, school codes of conduct penalize behaviors that these students struggle to control on a regular basis, putting them at risk for suspension 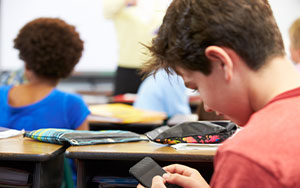 Students with learning and attention disorders appear to be in the midst of a school-suspension epidemic. According to a 2017 report from the National Center for Learning Disabilities, students with learning differences are more than twice as likely as their peers to be suspended or expelled because of social, emotional, or behavioral problems.

The NCLD report—Understanding the 1 in 5—looked at school discipline in relation to the 20% of students who struggle with learning and regulation disorders such as ADHD. It found that kids who have difficulty regulating their behaviors, emotions, or attention make up two-thirds of all kids with IEPs who are suspended.

And that may be the tip of the iceberg. Robert M. Tudisco, an attorney who specializes in school discipline and criminal defense, believes that the report probably underestimates the school discipline problem among kids with learning and attention issues.

Why are so many kids with LD and ADHD disciplined? One of the reasons is the strict enforcement of school rules—Codes of Conduct—which has led to an increase in the number of suspensions nationwide; another reason is the type of behaviors prohibited by those rules.

The vast majority of suspensions are for non-violent behaviors and/or “discretionary” offenses—behaviors for which school officials have a choice between suspending a student and implementing a less severe form of discipline.

Discretionary offenses include violations of school conduct codes, which prohibit students from engaging in behaviors considered disorderly, disruptive, and disrespectful. Examples include talking out of turn, running in hallways, dressing inappropriately, acting in ways designed to disrupt learning, being late to school, exhibiting hyperactive or aggressive behaviors, failing to comply with a teacher’s reasonable directions, playing games on a cellphone during instructional time, texting inappropriately, endangering the safety and morals of others, lying to school personnel, intentionally damaging school property or the property of others, sharing medications, and using alcoholic beverages.

In other words, school conduct codes commonly read like a comprehensive checklist of ADHD behaviors. The actions proscribed by the codes are the very ones that students with LD, ADHD, and co-occurring disorders struggle to control every day.

Typically, the reasons underlying problem behaviors are not that students with ADHD are “bad” kids or that they don’t know the difference between right and wrong. Instead, it’s because these kids have executive function impairments, an unquenchable thirst for instant gratification, and an inability to control themselves. It’s particularly difficult for kids with ADHD to control their focus, emotions, and impulses, to think logically, to consider the long-term consequences of their actions, to understand how their behaviors may affect others, and to learn from their mistakes.

The NCLD Report stresses that school suspensions have overwhelmingly negative effects on students. Not only does school removal force kids to lose essential academic instruction and positive social interactions, it increases their risks of being held back, dropping out of school, and failing to graduate from high school entirely.

Even more concerning is that these kids have a greater probability of becoming entangled in the special education-to-prison pipeline. Data show that particularly for kids with LD and ADHD, school suspensions serve as a gateway to the juvenile justice system, which is often followed by confinement in adult prisons.